Its been exactly three years since my last post on this blog, Engineering Revision. During that interval I finished up my PhD degree, and have spent a considerable amount of time sharing engineering knowledge in the college classroom. Teaching is a challenge that I truly enjoy, and I hope to continue improving my ability to share critical concepts in a concise and meaningful manner.

The podcast I started three years ago with Chris Gammell, The Engineering Commons, continues to chug along as well, although Chris is no longer co-hosting the show. However, I have three new co-hosts with whom to discuss the day-to-day joys and tribulations of an engineering career. It’s a thrill to share interesting conversations about the engineering profession with Adam, Brian, and Carmen, as well as our frequent guest experts.

My purpose in rebooting this blog is to start sorting out ideas for a book about the engineering profession. In particular, I want to provide practical advice for high school students (and their parents) who are considering engineering careers. I’m increasingly fascinated by the small incidents of happenstance that lead people into successful engineering careers, as well as the inability of most engineers to explain exactly how they add value to their respective organizations. I’m also concerned that the current emphasis on increasing the number STEM graduates is going to result in a boatload of unemployed engineers over the next five years. I’ll have to look it up, but I think the statistics are that 50% of engineering graduates are no longer working in engineering (or never worked in engineering) just five years after graduation. Will this only get worse with an increasing number of engineers in the workplace? And is an engineering degree to remain a job ticket, or will it become more of a philosophical degree; a lens through which to view and interpret the world?

So for a while, I want to make comments about books and articles that I’m reading (or more accurately, that I’ve been intending to read). I’ve accumulated a sizable collection of source material over the past three years; some of which I’ve actually read multiple times, but much that I have yet to crack open. As I’ve not yet found anyone summarizing such content, or attempting to pull these ideas together in a single location, I’m going to give it a shot.

My apologies if you’re shocked at seeing a new post from this site suddenly pop up in your feed reader after all this time. I’ll try to be more frequent in my future updates!

(Part 1 of this series can be found here)

In my last post, I suggested the term physineer be used to describe engineers who deal with the physical realm. These are individuals employed in the traditional engineering fields, such as chemical, electrical, civil, and mechanical engineering. To see how the responsibilities of such engineers are similar to those employed in non-traditional engineering fields, say software or financial engineering, I want to take a closer look at what we consider to be “engineering” activities. In doing so, I’m going to wax philosophical for a bit—but only for a short while, I promise.

We live in a physical world. To survive in this realm we must eat sufficiently well, avoid facing extreme weather conditions without shelter, and protect ourselves from oncoming traffic. Thinking about how a mythical super-hero might catch a bullet in his or her teeth is a fairly harmless mental exercise, but attempting to replicate the feat in real life will lead (most likely) to a life-ending result. We cannot escape many of the consequences that result from our actions (and inactions) in this physical existence.

Despite our inability to escape the material realm, we humans have a natural proclivity for creating mental notions of how and why things work. These abstractions have no material embodiment; they exist only as a result of a particular pattern of brain waves. We can perceive a model to exist in our minds; but we are unable to separate it from our consciousness. I can explain to you the properties of my model, and suggest relevant analogies, but I cannot directly hand you my concept, nor can you hand me yours.

In contrast to our human traits, the physical world has no need for abstractions. (Okay, some of the quantum mechanics stuff is kind of freaky, so feel free to tell me that I’m wrong.) The apple that fell in front of Isaac Newton did not need to compute the gravitational force acting on it; it simply fell. Electrons passing through a wire do not know the wire’s resistance or the voltage drop across the wire; they simply jump from atom to atom. Force and voltage and resistance are human abstractions; models that allow us to comprehend how the world around us behaves. As we learn more about the universe, we update our models. I’m not aware of any evidence that the universe changes to accommodate our conception of how it should properly function. 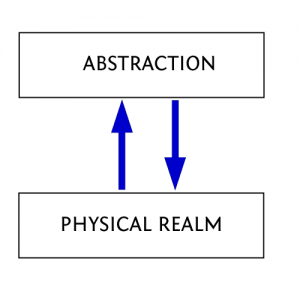 So I propose a logical separation between the abstract and physical realms (with apologies to the true philosophers among you, who will accurately identify my lack of knowledge about metaphysical concepts such as Idealism and Platonic Realism.) This separation is illustrated in the figure above. The arrows represent our ability to move (mentally, not physically) between the two worlds. As mentioned above, we have a tendency to generate theories about how our universe operates. If our models (abstractions) are sufficiently accurate, then they can be used to “explain” physical phenomena. In some cases, they can potentially be used to predict events and interactions that have not yet been witnessed. Even more powerfully, our abstractions can be used to create new devices or methods that cause the physical world to behave in a manner that is more to our liking. (Think central air conditioning on a hot August afternoon in central Kansas, when the ever-present west wind has inexplicably died down for an entire week, and shimmering black tar bubbles have popped up along every inch of sealed crack in the dull, sun-baked asphalt.)

To further our discussion, I’ve added the names of certain disciplines to the diagram. These are the STEM subjects; science, technology, engineering, and mathematics. It seems to me that we can assign one of the STEM fields, in a somewhat meaningful manner, to each side of this figure. Associated with the upward arrow are scientists who observe the real world and try to explain its behavior through the creation of theoretical models. Their model development is guided by the rules of logic and analysis that mathematicians advance while working in the abstract realm, represented here by the upper box. In association with the downward arrow, traditional engineers (physineers) use models to assist in safely modifying physical behaviors, and in creating new physical embodiments. Finally, technologists utilize and operate mankind’s tools and creations while working in the physical realm, which is identified by the lower box.

As with all models, my diagram is an incomplete representation of reality (a notion better stated by Howard Skipper). One obvious flaw is that very few individuals employed in the STEM fields have the luxury (or curse, depending on your perspective) of limiting themselves to a single discipline. In addition to creating new methods and mechanisms, engineers must be able to develop new models, and should be adept in applied math. Scientists must, at times, design their own equipment and develop mathematical tools. Today’s mathematicians may interact with computer hardware or gather physical data, while technologists occasionally have to model physical phenomena or solve obtuse logic problems. But this diagram gives context to my proposed definition of an engineer:

Physineers clearly fit into my definition of an engineer. But since those engaged in software, financial or social engineering do not design objects that can be physically embodied, can they really be engineers? Up until a few weeks ago, I would have said, “no.” However, note that my definition says nothing about the resulting designs being limited to the material world. In my next post, I will discuss the activities of engineers working in alternate realms.